As one who has been involved with the “Bring ESPN GameDay To Pullman” since it’s inception and waved in Eugene three times prior to yesterday, there is no greater excitement than when you get “the call” that it’s your turn again. The cylinder arriving at your house is akin to being a child on Christmas morning when, even though you know you’ve been naughty, Santa thought otherwise. Whether you’re a believing person or not, “Thank you, God!” does come out of your mouth.

For the wear and tear on the flags, fortunately I sew and knew I could fix them. The last time I had Ol’ Crimson and fixing a rip around the bottom grommet, I found out Curtis (RIP) the siamese cat loved to ingest thread from an unattended machine. A $1700 vet bill later, and a gracious offer from Tom Pounds to take his (grin), “this” time I was smarter. “Bandit In The Bedroom.” Coupled with jury rigging a pole that snapped, we were in business.

As the WSUAA rep for Oregon, and knowing ESPN, I knew they wouldn’t stay away from Eugene. They love it there and were just awaiting the opportunity. I alerted Cougs throughout the greater Portland/Vancouver area from football season’s start to be on the ready when the call came. On the west coast, you’re up in the middle of the night and it’s not for everyone. Imagine my surprise when fifteen people in cities from Vancouver to Eugene answered the call! Friday at work was unproductive due to sheer lack of concentration, my stomach was in knots hoping it all worked according to plan. “Oh ye of little faith!” These are COUGS, we’re talking about!

My carpool were ready and waiting 2:15AM, off to Eugene…..hungry, stopped at the 7-11 on Broadway when we got there. Not even five minutes went by, in pulled a car from Vancouver with wavers I’d only talked to online, “Go COUGS!” at 4:30 AM! Sweet. Texts from two other vehicles that they just entered Eugene, we waited for them, and off we caravaned to park. Flags assembled, and to the site we go.

Flags were only allowed in certain areas, but an ESPN tech came almost immediately semi-center and said, “Right HERE. Don’t move!” Out came my 05-06. Other wavers were there within a half hour, grouped wavers with Ol’ Crimson and Gray left, right, and center. I notified CJ we were in place, had texts from Will Walker and CJ, “reporting for duty” watching from home taking screenshots for olcrimson.org to help me move them for the exact spot for maximum viewing in prep for the 7:00AM main event. I cannot even begin to express how integral these two are to the success of this mission!

I didn’t need to wave this time. It’s the joy, pride, and affection on faces of those new to this 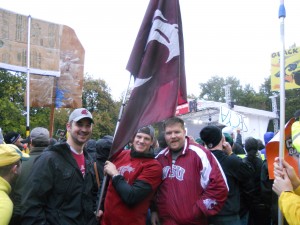 staring up at the flag they’re waving that absolutely made my DAY. There were some drunk UO fans, sure, that caused some angst, the occasional barb, but for the most part we were thanked for coming and treated with respect. “How do you DO this??” Everyone wants to know!  The pic minus Vancouver “Preston and Co.” (meeting the ESPN crew) was actually snapped by a Duck fan….”No, for what all of you do, get in the picture and let ME take it.”  Preston and Co pic outside the Duck Cafe?  “Go Cougs” from passers-by, a honked horn or two…  Imagine that….

Can’t wait for next year to do it all over again! Go COUGS!

Joanie aka “Nitz”
Portland, OR